UNSPOKEN is a drama set in the hills of Kingston on a hot oppressive summer night, when Caroline, who is 8 months pregnant, is awoken by a loud voice outside her window—only to then discover her husband is in an inappropriate scenario. This night rolls into the morning with Caroline feeling vengeful. 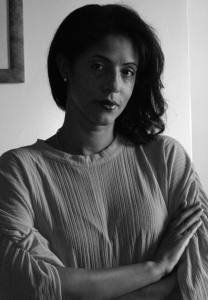 Danae Grandison was born and raised in Kingston, Jamaica. She graduated from School of Visual Arts’ Masters program in Directing with an M.P.S. in 2016 and holds a B.F.A. in Graphic design and Advertising from the Fashion Institute of Technology. Danae launched her career over 15 years ago in design and advertising. By 2011, she’d discovered her love for creating moving images and went on to win the SVA 16 MM Audience award with her directorial debut of her first silent film, Unconditional Love shortly followed by The Edge. In 2016 she released her thesis narrative titled, [Re]Defined. And today she’s proud of her newest effort, Unspoken, shot in her hometown Kingston, Jamaica. This literary adaptation speaks to the themes Danae likes to explore—the untold stories within a society at large. She is currently developing the feature script for the adaptation.