Andrew Millington is an independent filmmaker and an educator. He is a Senior Lecturer in Motion Picture Arts and Head of the Department of Creative and Performing Arts in the new Faculty of Culture, Creative and Performing Arts at University of the West Indies, Cave Hill, Barbados. He is a writer, director, producer and editor whose work includes the narrative feature film Zora’s Dream (2017), Guttaperc (2000) and the short film Masks (1998). Shakespeare in the Caribbean; The Caribbean in Shakespeare, a documentary commissioned by the British Council was released in June 2017. He is currently producing a documentary series Sugar, Spirits and Sovereignty, a historical treatment of the evolution of Barbadian society and will soon begin production on a new dramatic film John Crow Paradise through his production company Shango Films Inc. He has facilitated development workshops for international filmmakers across the globe including with Canadian based company Caribbean Tales and has lived and worked in the United States for over thirty years. Andrew holds an MA in Mass Communication and an MFA in Film from Howard University in Washington, DC.

Carolina Rueda has worked professionally in the fields of film and video production and film studies. She co-founded directed and edited weekly segments for LatinEyes, a television program that focused on Latin American culture in such a way as to break down the stereotyped images of Hispanic people living in the United States. LatinEyes received an Emmy Award for Best Cultural TV Show in 2006 (San Francisco, CA). Carolina is the director of the 2021 feature film Oklahoma Mon Amour, shot between Mexico and Oklahoma. The film has been recognized nationally and internationally and has won prizes at WorldFest Houston, Female Filmmakers Festival Berlin, Seattle Film Festival, Toronto International Female Film Festival, among others. Oklahoma Mon Amour signed a distribution contract with Freestyle Creative Media in Los Angeles, CA. and will be available in Feburary 2022. Carolina has a Ph.D. from the University of Pittsburgh, has taught film editing and film studies courses, and is the author of the book Ciudad y Fantasmagoría: Dimensiones de la mirada en el cine urbano de Latinoamérica del siglo XXI (City and Phantasmagoria: Dimensions of Seeing in the Latin American Twenty-first Century Urban Cinema), published in 2019. 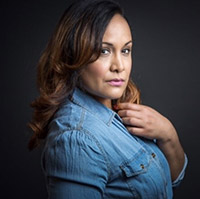 Maite Bonilla was awarded the 2021 LATA Extraordinary Humanitarian and Extraordinary Outstanding Performance for her role as “Beli” in the play “The brief and wondrous life of Oscar Wao” by Junot Diaz at Repertorio Espanol. She is an award winning actress and nominee from several prestigious Latino awards such as ACE, HOLA, LATA, and ATI for her role as “Ramona” from the nove “En el nombre de Salomé” by Julia Alvarez ( In the name of Salome) at Repertorio Espanol. Ms. Bonilla directed, co-wrote and starred in her first short film LA ENTREVIÚ which won Best Actress, Best Screenwriter and Best Short (second place) at FEMUJER film festival (2019) in the Dominican Republic where she was born. She recently played the role of “ Latifah” in the feature film “ 4 Piezas” by Director Eduardo Shlomo Vazquez in NYC. Ms. Bonilla recent finished her second screenplay “I AM POEM” which also will be directed by her. She is a New York Artist Corp Grantee of $5000.00 and won $4000.00 from the Inwood Film Fund for her short film “I AM POEM “. 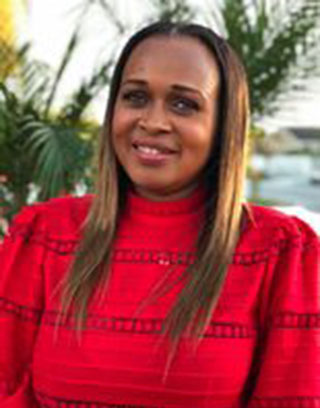 Denise Williams Watts oversees the creation, development and global production of video content for Apple Music. Denise’s team develops and produces original videos that support Apple Music’s editorial business priorities. Denise is a seasoned creative producer whose professional background is marketing and creative. She is a manager of people and operational flow. Denise is the former VP of Creative & Visual Content for Warner Records and was the creative force behind such projects as Bebe Rexha, Andra Day and Jason Derulo, and many more. Denise also works with the Belize International Film Festival, her native country to bring in relevant judges for the Music Video Category who can offer critique and exposure at the same time. In addition to this, Denise is also a co-founder of Honorable Women in Media that celebrate women who work behind the scenes for some of biggest brands. HWIM offers a platform for women in entertainment executives to celebrate one another and share their stories in a room full of industry trailblazers.